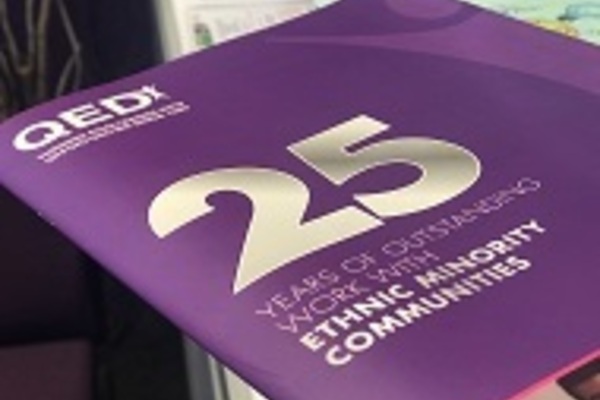 The story so far

Despite working at national and international levels, QED Foundation has also invested more than £16m directly in disadvantaged communities across the UK.

We have become known for pioneering ground-breaking initiatives such as job 'melas', which give people seeking work the opportunity to meet employers face to face.

QED Foundation was one of the first organisations to appreciate the important part Muslim supplementary schools could play in improving children's academic performance. We led the way in delivering reading and writing classes and careers advice to madrassah students.

We have helped 32,000 people from ethnic minority backgrounds by providing education and training. Our individual support packages include English classes, advice and guidance, help finding jobs and introductions to British citizenship, culture and heritage.

We developed a similar programme in Pakistan so that over 1,000 women arrived in the UK already equipped with the skills needed to settle in quickly and make a success of their new lives. Other EU states have followed our lead by delivering pre-departure training.

QED Foundation campaigns have encouraged ethnic minorities to consider taking jobs in all sectors of the economy and at all levels of seniority. At the same time we have worked with employers and professional bodies to open up opportunities to applicants of all races and faiths.

We helped 800 directors and senior managers of large private and public sector companies to draw up action plans for recruiting, retaining and rewarding BME employees. We also supported 350 small and medium-sized companies in England and Wales to address underrepresentation of ethnic groups in their workforces.

QED Foundation is increasingly using its international links to support initiatives that benefit both the UK and Pakistan. These have included bringing together vice chancellors of major Pakistani universities and their British counterparts to work out ways of tackling radicalisation on campus.

We set up PAS Foundation as an independent charity to raise money so that needy people in Pakistan can learn the skills needed to find jobs or set up their own businesses.

Volunteer Give your time to help others
Services Click here to see what we offer
© 2001 – 2020 | QED Foundation Limited t/a QED. Permission is required to re-use content or images in print or electronic form. QED Foundation is a company limited by guarantee. No share capital. Registered Charity No. 1004608. Registered in England No. 2553828.
Log in | Powered by White Fuse