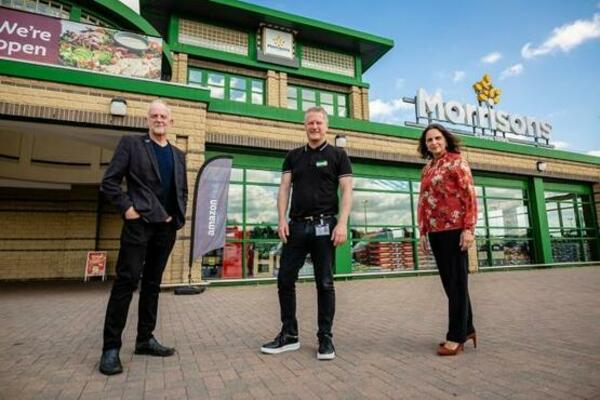 MORRISONS has been announced as a founding partner for Bradford’s City of Culture bid.
15 Jul 2021

The news comes just days ahead of the Bradford 2025 team submitting its official intention to the DCMS.


Bradford-based Morrisons, with its headquarters at Thornbury, employs 6,000 people across the district and will be encouraging staff and customers to get behind the city’s bid through in-store events and promotions, as well as profile-raising and social media activity.

David Potts, CEO of Morrisons, said: “We’re a proud Bradford business which is why we’re supporting the city’s City of Culture bid.

“As we recover from the pandemic, our communities are more important than ever. We believe Bradford 2025 can help bring the whole district together for a cultural showcase of what this city has to offer on both a national and global stage. We are very much looking forward to getting involved!”

Adeeba Malik CBE, Deputy Chief Executive of the QED Foundation and Member of the Bradford 2025 board, said: “Morrisons has a great reputation for working with and supporting the local communities around their stores and where their staff live, so having them as a Founding Partner is a huge boost for Bradford 2025.

“To have businesses like Morrisons with really strong local knowledge and roots can only make our case to bring the City of Culture title to Bradford even more compelling.”

The announcement that Morrisons is getting on board, as the race for the 2025 title ramps up, follows last week's news that The Broadway, Bradford is also a Founding Partner supporting the City of Culture bid.

Bradford will join other bidding cities from around the UK in submitting their official Expression of Interest on Monday, July 19.

A longlist of six places will then be announced in early September.

Businesses and organisations, large or small, can get involved and help to support Bradford 2025 in a variety of ways including sponsorship and partnership packages. To find out more email [email protected]

* Awarded every four years by Government, the UK City of Culture title has had a transformational impact on previous host cities, securing millions of pounds of investment and acting as a catalyst for creative place-making and culture-led regeneration. Bradford joins a number of cities and areas competing for the title. With groups of places now allowed to bid collectively to be UK City of Culture, Bradford is facing competition from places such as Conwy, Medway, Gloucester Southampton, Wakefield and South of Scotland, among others, which have all so far announced their intentions to bid.

* See our interview with Bradford 2025 bid director Richard Shaw, ahead of Monday's milestone for the bidding process.