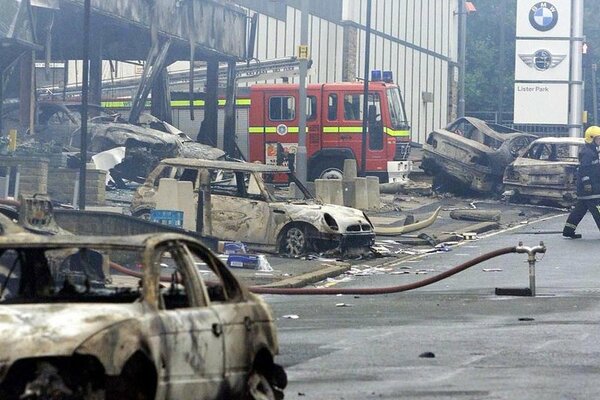 Bradford riots 20 years on: Challenges for city remain but there are reasons for hope - Mohammed Ali

The world changed in September 2001. The fall of the twin towers was a turning point in global history – the moment when our hopes for a more peaceful and outward-looking society seemed to be blown apart amid the billowing clouds of dust and rubble.

But many of those living and working in Bradford had seen their dreams shattered two months earlier.

As the streets of Manningham went up in flames, people feared for their lives and their livelihoods.

It was only later that we realised that the ties that bound us together as a community had also gone up in smoke.

I was just 12 when I left Pakistan and moved to Manningham to join my father, who worked in the textile mills.

In July 1969 Bradford was a vibrant, exciting place to live – but the boom times did not last. By 2001 I had moved to the nearby suburb of Heaton, a few roads away from a BMW garage that had been torched during previous disturbances in 1995.

Just months before the 2001 riots we had celebrated the 10th anniversary of QED Foundation, the charity I had set up in response to the inequalities blighting the lives of the inner-city communities that I saw around me every day.

Then, as now, our aim was to help to build a cohesive, peaceful society by creating opportunities for all.

We organised training courses for new arrivals from overseas, we helped young people to set out on rewarding career paths and we encouraged politicians, civil servants and business leaders to ensure their policies met the needs of disadvantaged groups.

Yet – despite reflecting proudly on our achievements to date – I was disappointed that we were still there at all.

Back in 1990 I had believed, perhaps naively, that we would not be needed in a decade’s time.

By then, I thought, we would no longer have to convince people that promoting racial equality was in the interest of wider society.

In some ways I was wrong to be downhearted. Today, as I look back on our work over the last three decades, I realise just how much times have changed.

In 1990 all but four of our MPs were white. Even at my most optimistic, I would never have dreamed that the Cabinet would be as diverse as it is in 2021.

Slowly but surely, the professions have opened up to men and women from a wider range of ethnic backgrounds and a few of them have even made it to the top.

But it’s easy for a small number of high-profile successes to blind us to the fact that if you come from a disadvantaged minority group, you are much, much more likely to struggle to find a job, be overlooked for promotion and have to make ends meet on a limited wage.

This is particularly true in Bradford inner-city wards like Manningham, where 70 to 80 per cent of the population is of Asian heritage.

Large families packed into crumbling inner-city terraces cannot afford to adopt the healthy living practices that so many of us take for granted.

Twenty years after the riots, we have had a stark reminder of the consequences of allowing such social inequalities to persist.

Ethnic minorities have always been more likely to die young and suffer more years of ill health then their white counterparts.

Pakistani men have the highest rates of heart disease in the UK. Such statistics do not usually make the headlines but the increased death toll from coronavirus was impossible to ignore. Over the last 12 months Black Lives Matter protests have also shone a spotlight on the consequences of entrenched racial inequality.

Yet there is hope. Bradford is the youngest major city in the UK and one third of its residents are from an ethnic minority background, giving it vibrancy and drive that could see a return to the heady days of my 1970s’ youth. If our bid to become UK City of Culture in 2025 is successful, the future could be bright – but only if we invest in the next generation.

So, as QED Foundation enters its fourth decade, I am making a belated birthday wish that all Bradford’s young people receive the support they need to fulfil their educational potential regardless of their racial backgrounds.

I look forward to the day when schools and colleges work hand in hand with community-based organisations like madrassahs that have a deep understanding of the needs of pupils and their families.

And I hope that tomorrow’s students are encouraged to take up jobs and apprenticeships in all areas of employment and can aspire to work at every level of seniority.

Dr Mohammed Ali OBE is the founder and CEO of QED Foundation, a national charity.