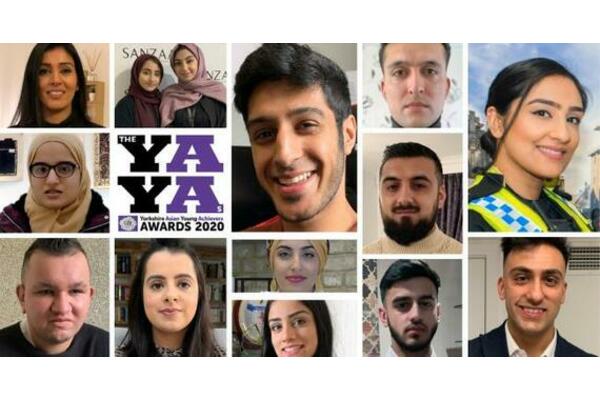 A STUDENT who went into the care system in Bradford at just 18 months’ old and is now studying to become a physics professor is the first Yorkshire Asian Young Achiever of the Year.

Mohammed Ali Hussein, aged 20, was one of 13 winners at the YAYAs awards, which were announced in a special virtual event webcast on Wednesday night.

Mohammed, aged 20, who is currently living and studying in Hull, said: “I want to dedicate this award to my first foster family, my auntie, my uncle and my brothers who gave me that initial push into education.

“They really helped me by taking me to the library and just getting me interested in the things I am. I definitely wouldn’t be here today without them.”

He said it was recognition of his hard work so far and he advised others who wanted to move forward to “continue writing their stories and working hard to be where you want to be.”

Dr Mohammed Ali OBE, founder and chief executive of the Bradford-based QED Foundation, who launched the awards in conjunction with York St John University to mark the charity’s 30th anniversary, said: “Mohammed is a truly remarkable young man who has overcome a very difficult background to become a shining star and someone who, we believe, will go on to do great things in the future.”

The judges had originally intended to choose an overall Young Achiever from among the winners of the 12 award categories but unanimously decided that Mohammed stood out from all the other entrants in this year’s shortlist.

Of Pakistani heritage, Mohammed overcame a chaotic home life to become a mentor, support and champion for the voices of children and young people in care. He entered care himself at just 18 months old because of alcohol and domestic abuse issues in his family; he was moved to a number of foster placements, each of which broke down, until he was eventually placed in one family at age 10 for nearly a year.

He was then moved to a children’s home where he suffered from bullying – both there and at school – and struggled to find the peace and space to study before finally discovering the solace he needed in libraries, where he used to go to learn on his own.

At 16, he began to live more independently and moved into a semi-independent household and, by the time he was 17, he was living entirely independently while studying for his exams. He achieved 11 GCSEs and three A-Levels and he is now studying Physics with Astro-Physics at the University of Hull and plans to go on to study for a PhD. He hopes to stay in academia and go on to become a university professor.

Mohammed, who lives in Hull, has also been chair of Bradford Children in Care Council (CICC), representing all young people in care and care leavers in Bradford Council.

As chair, he spearheaded many changes for looked-after and leaving care children from the installation of wi-fi in Bradford’s residential homes to campaigns around young people’s rights. He has delivered training to all new foster carers in Bradford, training that has now been incorporated into the instruction that all new foster carers complete before they enter the Bradford fostering service.

He has also delivered training to students and social workers. He has challenged on behalf of Bradford’s care population and is now a member of the young people’s panel interviewing perspective employees, from directors to residential workers.

The YAYAs awards are open to any young person of South Asian heritage (Pakistani, Indian, Bangladeshi etc) who was born in, or lives and works in, Yorkshire.

They are aimed at those socially-mobile young achievers who have overcome deprivation and disadvantage or have broken through traditional barriers to progress and have the potential to be role models who can inspire others to follow them.

Dr Ali said: “The standard and quality of entries for these awards has been remarkable. There have been many humbling and life-affirming stories of people overcoming the odds to carve their way in life and we feel enormously proud of all those who entered.

“The nominations promise a very bright future for young people of South Asian heritage who, I am certain, will go on to do great things throughout Yorkshire and beyond.”

Professor Karen Bryan OBE, vice-chancellor of York St John University, said: “We are very proud to be the main sponsor of the first ever YAYAs. These awards resonate so much with the values of the University which has a long history and a strong reputation for identifying, nurturing and celebrating talent from every background and breaking down barriers to help young people succeed.”

The awards webcast was hosted by the award-winning BBC TV and Radio presenter and stand-up comedian Noreen Khan.

In all 37 nominees were shortlisted for the 13 categories after a huge number of entries from across the county.

The other winners were:

Harleen Kaur, aged 21, is of Indian background and a student at Leeds Beckett University. She lives in Bradford and excels at both karate and kickboxing. She won a Gold Medal at the 2015 British Championships and was the first British Asian female to represent Team England. She won a kickboxing Silver Medal at the World Championships in 2015/16. In her spare time, she volunteers for a charity in India.

Haleema Rafiq, aged 27, from Doncaster, is of Pakistani background. She was first in her family to get two degrees in Psychology and has done both paid and voluntary work in the mental health sector. During her studies, Haleema sadly lost her mother and became a carer for her two brothers – one of whom has cerebral palsy. Despite this, Haleema finished her degree and continues to work helping ill patients.

Ismail Hussain is a faith inspired singer with a massive social media following. Despite being only 18, he has already raised thousands of pounds for people in need and performed across the world. Ismail, originally from Bradford, is of Pakistani heritage and is an ambassador of peace and harmony across the globe. He has been singing since he was five and now runs workshops to teach young people to sing.

ACHIEVEMENT IN THE MEDIA - ROMANA SHAH

Romana is from a traditional Pakistani family in Sheffield but is now based in London. Raised by her single mother, Romana, aged 27, worked hard to gain a First-Class degree in English Literature, and followed this on with a Masters in PR. She now works at Field House Associates, working with several fast growth technology companies, a venture capital firm and corporate innovation arms. She is the only Muslim/Asian employee there.

Born in Batley, of Pakistani heritage, Haris Rashid became the first south Asian president at Liverpool Hope University’s Student Union. His low social economic background hasn’t stopped him from achieving his Bronze and Silver Duke of Edinburgh awards, studying law or taking part in the National Citizen Service. Haris, 21, also worked with the late Jo Cox MP in Batley and currently volunteers for the night-line service at his university.

Simran, 27, is from a working-class Punjabi Sikh family. Based in Wakefield, she was the first person in her family to attend university, graduating from Leeds Beckett with an LLB Honours. Simran now offers legal advice to low income clients and specialises in immigration – working with those from war torn countries such as Iran and Syria. She is currently volunteering at a Sikh temple presenting their cases to the Home Office.

Wasjah Mehdi spent her childhood moving between Pakistan and Italy but now lives in Bradford. She experienced bullying from classmates and teachers and, as a result, lost her confidence to speak. Wasjah, 17, is now enrolled onto a Level 1 ESOL course as a selective mute and takes part in extra-curricular activities such as the Shakespeare club. She is currently making inspirational progress, performing as Shylock in A Merchant of Venice.

Project Officer Ali Gulis, 29, moved to the UK in 2001 knowing no English and grew up in poverty. He became Head Boy at his sixth form and, after university, interned for Bradford Council’s Environment and Climate Change unit while completing his Masters in sustainability. He now works in the Department of Health and Wellbeing and is part of several boards, from service improvement, to Brexit preparedness, to biomedical and electronic engineering.

Aasim Khan, 28, is of Pakistani heritage was raised in a deprived area of Sheffield. He has since dedicated his life to helping others and raised over £300,000 for refugee camps. Aasim also founded Darnall Football Academy to provide young people with a safe place to socialise. Currently, 500 young people are registered to the academy and competing in leagues. In his spare time, Aasim also writes poetry about Islamophobia.

Amreen Iqbal is a Police Constable for West Yorkshire Police. For seven years, she worked as a special constable, and is trained to deal with sexual assaults, rapes and riots on the front line. Amreen, 30, was recently awarded an employee of the month trophy for her investigative work. She is one of the very few Asian female police officers in the county. She is of Pakistani background and based in Bradford.

Sanya and Zahra, both 27, were just two friends at school when they opened a small market stall in 2010. They kept the stall while studying Enterprise at Huddersfield University – a degree backed by “Dragon” Theo Paphitis – and at the same time opened their first store. Later this year, the girls will open a boutique showcasing their designer range of modest clothing. Both girls are of Pakistani background and grew up in Bradford/Keighley.

Hassan Hayat is of Pakistani background and suffers from Alstrom Syndrome; a degenerative disorder characterised by vision and hearing loss, obesity and diabetes. Despite being completely blind, Hassan, 24 has taken part in several sporting challenges such as cycling the UK coast, climbing Snowden, playing blind cricket and even wheelchair basketball. He is now training for Ben Nevis. Hassan also works with Bradford University to help them engage disabled students.