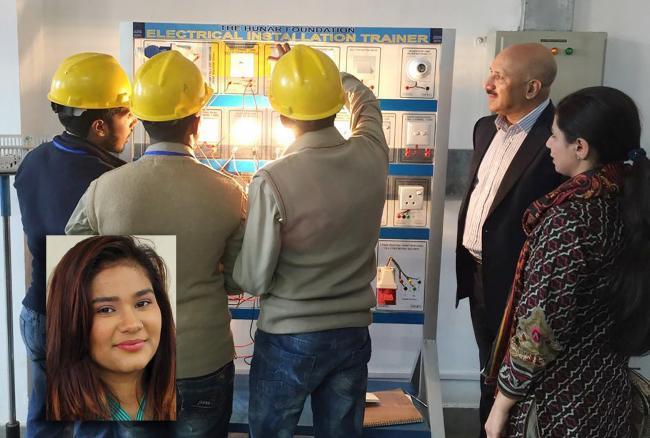 QED, Helping transform the lives of some of the country’s most disadvantaged people.
Skip to main content

ASK any charitable organisation how to help people out of poverty and you will be met with myriad solutions. But look for a common thread and you will often find the phrase “help people to help themselves.”

Giving donations of aid, food or financial, undoubtedly helps and is often the only answer in times of dire need or crisis. But what happens when the aid runs out? Can we really rely on a bottomless pot of goodwill to keep papering over the cracks? Is there a way to ensure that help is sustainable, that it helps a person build their way out of poverty permanently? One Bradford-based charity certainly thinks so. QED was born in the city more than 28 years ago and has worked tirelessly to improve the lives of disadvantaged communities through training and employment services, equal opportunities projects and campaigns. It has raised and invested more than £16 million directly into helping at least 35,000 people but its influence is much wider; there’s little doubt the lives of hundreds of thousands have benefited from its work.

QED is best known for its efforts in the UK, efforts that led to its founder and chief executive, Mohammed Ali, being awarded an OBE and his deputy, Adeeba Malik, a CBE. However, it has worked across international boundaries throughout and is now turning the spotlight on tackling disadvantage at source in one of the world’s poverty hotspots, Pakistan.

Dr Ali says: “About 60 per cent of Pakistan’s 210 million people live below the poverty line. Trying to survive on less than £1.50 a day means they cannot even buy enough food to supply their minimum required calorie intake.”

With 70 per cent of its population aged under 30, the country is failing drastically to provide enough work, which drives many to seek better lives abroad. Even with Pakistan’s new prime minister, former University of Bradford chancellor Imran Khan, pledging to create 10 million jobs, the future looks bleak for many. “It's not so easy when people are unable to gain vocational skills because they cannot afford the tuition fees,” says Dr Ali. “We know the only long-term solution is to help people gain the qualifications they need to find jobs or set up their own businesses and social enterprises.”

To that end, QED has created the Poverty Alleviation Scholarships foundation (PAS) to help transform the lives of some of the country’s most disadvantaged people, such as orphans, single mothers and minority religious communities.

“We help them escape a vicious cycle of poverty and lack of opportunity by giving access to free vocational training courses,” says Dr Ali. “As well as enabling our students to gain nationally and internationally recognised qualifications, we support them to find a job or set up a business. PAS empowers people to learn the skills they need to earn a living, instead of relying on gifts and donations to survive. And because we encourage self-reliance and independence, we also help to build sustainable and resilient communities.”

It has clear evidence that it’s scholarships, with the help of bodies such as vocational training organisation the Hunar Foundation (HF), can make a difference. One example is young Rahmeen Fiza, who was so shy when she first went to HF she couldn’t even speak to her classmates, yet two years later she was encouraging others as a guest speaker at an HF event. Rahmeen’s training in hair and beauty treatment helped her secure a salon job in the United Arab Emirates and now she earns enough money to support her family and pay for her brother’s education. She said: “The training empowered me as a woman and enabled me to financially support our family and lift our standard of living. I never thought I would be independent and working but now I like to take responsibility for not only myself but others too.”

Dr Ali hopes to encourage some of Britain’s 1.2 million people of Pakistani heritage to generate more such success stories by helping to provide scholarships. “The average cost of a vocational course in industrial sectors such as construction, hair and beauty or information technology is just £200,” he says. “Our students also go on to become electricians, plumbers, security guards, sewing machinists, refrigeration and mobile phone technicians or follow a range of other career paths. We also offer help with finding jobs or setting up businesses. To increase our impact we're also planning to build the capacity of vocational training establishments in Pakistan and their staff by inviting UK-based colleges and training organisations to help them in various ways including, for example, donating used training equipment and machinery and training the trainers either by visiting Pakistan or through Skype.”

The benefits are obvious, not least in helping the poor in Pakistan to stand on their own two feet and not dream of migrating to western countries, but most charitable giving tends to be aimed at short-term single projects or emergency relief.

Dr Ali says: “One-off financial gifts have their place but they do not address the root causes of poverty and inequality. A gift of just £200 used in this way is enough to transform someone’s life forever.”